Grief on the Reef 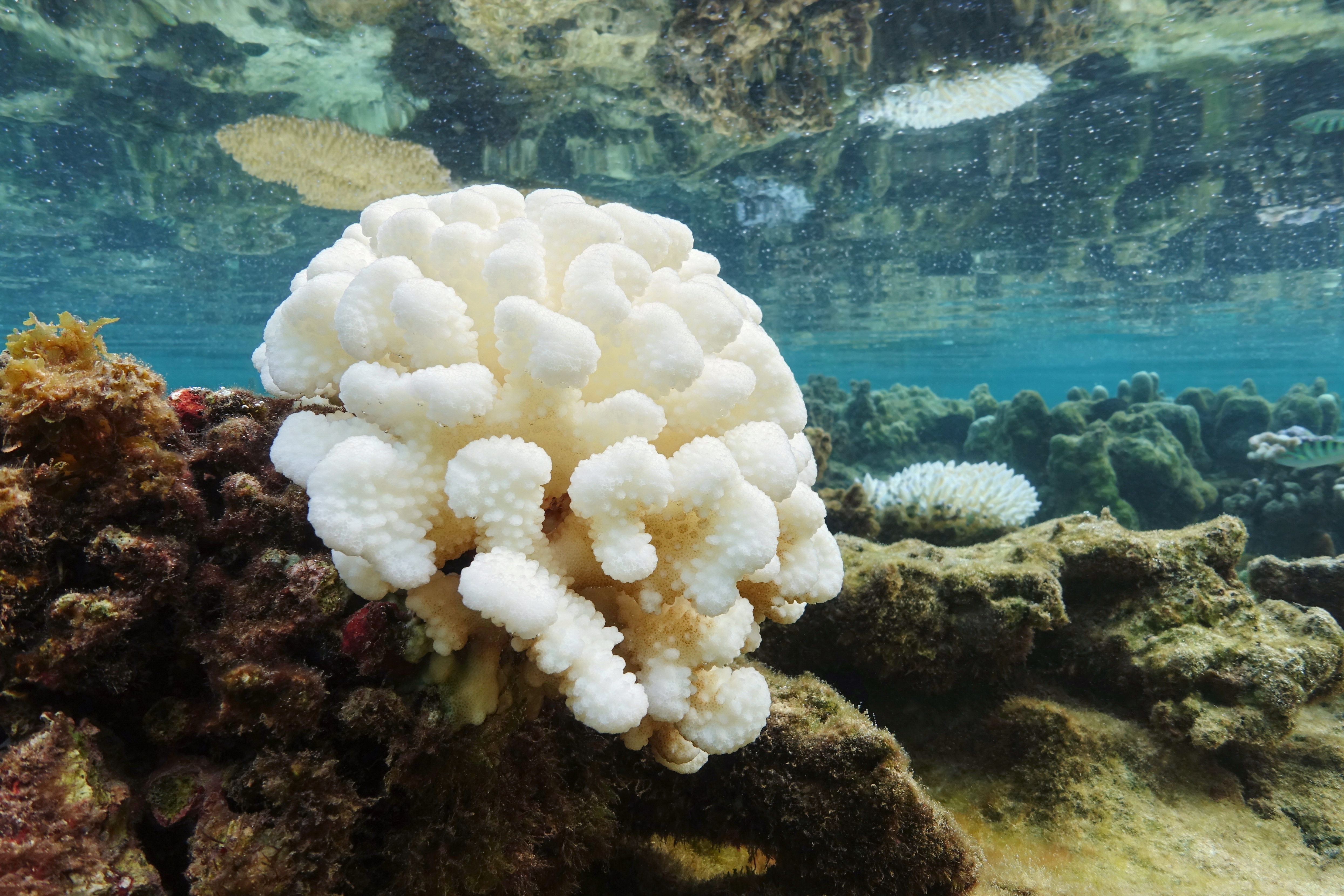 Coral bleaching is in the press daily. It's a fever that shows no sign of abating. Back in 1998, while surveying a reef in The Philippines, I vividly recall the surprise at jumping into bath tub warm waters Descending to 10 metres, my dive computer told me the temperature was still 30°C. Before us was a scene from the magical land of Narnia. Every coral, as far as we could see, was a shimmering white. Pale pink table corals punctuated a forest of white skeletons. Swimming over the tops of the corals we could see tiny polyps, tentacles out hunting for food, their colour though, was completely absent. I thought we had come across a garden of bizarre new coral. Looking around, it was clear this was something else entirely. I had never seem it on such a scale, and had previously only read about it. Here was a phenomenon called coral bleaching.
How to stress a polyp

Coral reefs exist happily within the temperature range 25 to 29°C. Spikes in sea temperature outside of this narrow band causes bleaching. When exposed to prolonged spikes, bleaching is fatal for corals.

Corals are colonies of tiny jellyfish type animals called polyps, living together in their calcified cups to form the vast structures we know as corals. The polyps have tentacles equipped with stinging cells called nematocysts, waved in the currents to snare tiny planktonic creatures to eat.

But their main nutrition comes from a relationship with a tiny algae living in their tissues -zooxanthellae (zoo-zan-thel-ee). Its one of natures most beautiful symbiotic relationships, where everyone benefits. The algae are plants, capturing sunlight to enable the corals to grow and thrive. In return the tiny zooxanthellae get a safe place to live.

When stressed, through spikes in sea temperatures, these tiny algal cells are expelles part of the coral polyps defence mechanism. Usually the stress is short lived, the coral would get its algae back enabling it to recover. And indeed bleaching does happen on a small scale in nature. But times, and our climate, as we know, have changed. The 1998 mass bleaching event was the first of many and left marine scientists around the world in shock for the sheer scale and damage it caused. There are natural increases in sea water temperature usually coinciding with El Niño events. It is the period of normality between these events that allows the coral to recover. So what then has changed? Our problem is that the normal times between these events is now also warmer so corals do not get an opportunity to recover from the stress. And extreme El Niños are becoming more frequent as ocean temperatures rise.

“The time between bleaching events has diminished five-fold in the past 3-4 decades, from once every 25-30 years in the early 1980s to an average of just once every six years since 2010,” says Prof. Terry Hughes, lead author a paper published in the prestigious journal, Science, the first to assess the scale of coral bleaching globally.

“Before the 1980s, mass bleaching of corals was unheard of, even during strong El Niño conditions, but now repeated bouts of regional-scale bleaching and mass mortality of corals has become the new normal around the world as temperatures continue to rise.”

Does it matter if we lose these vast rainforest of our oceans? Coral reefs cover only 1% of our planet but are home to more than a third of all ocean biodiversity. If our oceans are the lungs of our planet then coral reefs are the blood vessels running through this vast network of life on earth. Yes they matter, enormously so.

The media coverage of coral bleaching is bleak, offering little hope. But among the metaphorical hand wringing there are scientists quietly and diligently beavering away on ways to help and indeed ultimately save our precious coral reefs.

The Search for Super Corals

In December last year a tourism operator, The Great Barrier Reef Legacy organised a research expedition offering scientists places aboard to spend three weeks surveying parts of the GBR rarely visited. Their aim was to find a recently discovered phenomenon “super corals”- corals that for some reason have managed to survive the onslaught of ocean warming.

Dr Emma Camp from University of Technology Sydney was aboard the expedition.

“The idea of super corals has been around a while, with scientists using it to describe corals that have naturally adapted to tolerate warmer conditions, or can be genetically adapted to survive future stress events.”

The hunt for super coral has evolved from the need to find corals more resilient to the changing environmental conditions occurring from human-impacts, she says. But super corals cannot save our reefs alone.

Even if we were to cut carbon emissions today, we will be stuck with at least a decade of environmental change while the climate equilibrates.

“Super corals could help buy us time” she says. So helping some corals survive into the future. Camp collected 99 live coral samples of 12 species of super corals during the expedition. With colleagues at the Australian institute of Marine Science she is running detailed investigations to define their biological make up to understand why some corals survive, when others do not.

There no clues yet as to why some species are more resilient. “One of the key issues is why some reefs survive stress and others don’t. It’s complex, and several factors are involved- rigidity, species diversity and others.”

She is hopeful that they will have some answers soon.

GBR suffers back to back bleaching

The Great Barrier Reef in Australia has been hit hardest of all with back to back bleaching events. In the first half of 2016 sea surface temperatures spiked affecting the worlds reefs. The GBR suffered widescale bleaching especially on its northern reefs with scientists estimating 95% of reefs were affected. An estimated third of shallow water coral was lost across the Coral Sea.

Just when marine scientists thought it would be a while until the next event, giving corals time to recover, disaster struck again. In late 2016 and early 2017 another spike in temperature occurred, sending tendrils of death across the remaining corals.

2018 has been designated as International Year of the Reef. The third in history as a response to the dire conditions facing our coral reefs.

Professor James Crabbe is Chair of the Education Committee of International Society for Reef Studies. He says that education is the key.

“Corals have so many stressors put on them; overfishing, pollution, as well as ocean warming and acidification. Education is crucial, and the earlier the better.”

“ Last years IYOR gives us a platform to inform and educate people about reefs”.

The science is out. It is time to act. If we want to keep the astounding and critical beauty of the worlds coral reefs, it is in our own hands.

How you can help

Information on how you can get involved -IYOR Visit www.iyor2018.org

Reduce your plastic use